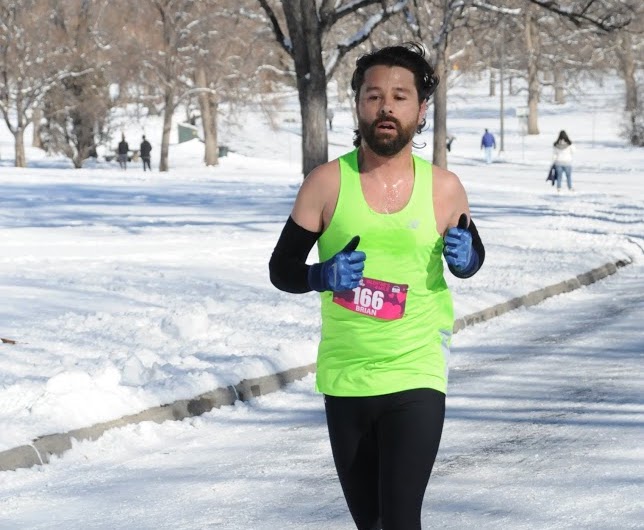 Brian Glotzbach is 45 years old and lives in Castle Rock, CO with his wife and two boys. Brian began running seriously again in 2003 after running one year of track in high school competing in the 1600 and 3200 meter events and placing 5th in the League 1600 as a Junior. In 2005 he ran one year with the Metro State Cross Country Team when I was 30 and returning to school to finish my degree.

Brian’s PRs are 4:57 for the mile, 16:41 for 5K, 34:15 for 10K, 1:18:47 for the half marathon, and 2:52:17 for the marathon. Some of his running accomplishments include winning the men’s overall title at the Dino Half Marathon in Vernal, UT in 2018, placing in the top 3 overall in the Run Denver Race Series from 2014 to 2020 including winning the overall series championship in 2016, competing in 10 Boston Marathons, and placing first overall in numerous other local events.

Brian has also successfully coached numerous athletes from their first 5K to achieving a Boston Marathon qualifying time. Brian assisted with the Heritage High School Cross Country team from 2010 to 2012 and the Eagles placed 2nd and 5th in the Colorado State Cross Country Championship Meet in 2010 and 2011. Brian was also the track coach for the Colorado Columbines Women’s Running Club from 2011-2019.

Brian’s family is also active in the sport. His wife was the Pikes Peak Marathon Masters Division Champion in 2017 and his sons both run for the Kokopelli Racing Team based out of Castle Rock. His older son Colton participated in his first Run Denver Race Series in 2021 and won the 12 and under age division series championship at 9 years of age.